There's really no need or commendable purpose to negatively judge anyone or anything, ever. 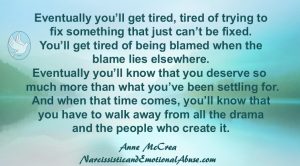 If you see someone abusing a child, do you walk away and leave the judgment to someone else?

People do judge other for so many minor things that they don't agree with but the word "Never" would allow people to constantly take advantage of people that cold not protect themselves. If you were to "Never" judge anyone, you could get rid of the Police and all the Military in the world. We would digress back to the concept of Only the Strong Survive.

I disagree. Realizing that something is not what you want, and may even have profoundly negative effects on you and other people, gives you the chance to identify what you do want, and what kind of world you want to live in, and shift your focus to making those changes.

If you encounter a negative person, it's totally acceptable to decide they have a shitty vibe, and either limit contact with them, only acknowledge them when they're acting in positive ways, or end it altogether. If your house is falling apart and the landlord refuses to fix anything, it's okay to make a negative judgment of that situation, then focus on finding a better place to live, with a landlord who cares. If a group of people are being denied the same fundamental civil rights most other citizens enjoy, it should stand to reason that yes, that is an unacceptable situation, and must change.

It's totally okay to make negative judgments, as long as it's a first step on the way to creating something better.

There are people who get stuck in constantly making negative judgments, who whine and complain and wait for everybody and everything else to change so they can be happy, but all they're doing is creating (and perpetuating) resistance, which keeps them stuck.

There are people who rage against something in the world of politics (the Evil Orange Man is a current popular target), or the environment, or in cultural/social trends that they don't like, but all their energy is focused on being anti-whatever. They are so focused on being anti- that they neglect being pro-something better, so all they are doing is empowering what they hate by putting up intense resistance to it.

If they'd say, "Well, I don't like this situation, or that politician, or how other people are choosing to live, but I'm going use that to clarify what, exactly, I do want. And, having done that, I'm going to keep my focus upon what I want, on my desired result, thinking and acting accordingly, so solutions--or at least relief--have a chance to come to me," they'd make a lot more progress toward what they want, and feel better while they do it. And in the process, they'd attract other people who shared in that desire, and they could progress toward it together.

Very often, you do have to say "No" to things before you can identify what you want to say "Yes" to. And as long as that saying "No"--that negative judgment, that refusal, that resistance--is simply a stop on the way to "Yes," it's not a problem. It's stopping at "No," and staying there, while also trying to have what you've said "Yes" to, that wrecks your ability to manifest.