Let's talk to the animals!

0
I'm an Animal Communicator / Pet PsychicLet's all see what the animals have to say!
80 Members

What have you done when, your NEW human partner doesn't like your pet?

I have come across some really interesting situations in this case. Usually it centers around the pet being or sleeping tn the bedroom. Most of the time the animals wins out and a new partner is found!!!!astro.jpg

Is your pet your therapist????

Blog on to my latest radio show at www.iamhealthyradio.com Just click on my pic :) My guest this week ( Barbara Levine MFT) discusses her work in EQUINE ASSISTED THERAPY! Yes horses are now being used in human psychotherapy sessions, how cool ....... Please check it out it's awesome. Peace, Candi

Is my pet happy?

This is a question that I get asked pretty much in every session. Thank goodness for me most of the time the animal is happy. BUT sometimes I can end up with quite a long list of requests from the four leggeds! If you truly are trying to please your animals, really try to put yourself in their paws, and not buy things that just you like. I would like to hear from my group on some winners and loser items that were purchased for their pets. What are some things that your pets are attracted to… 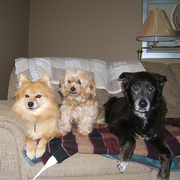 I want to share an animal story. My fiance and I bought a home in Sedona, AZ last winter. It backs up to the desert. We've had several interesting animal visitors but the most special are the javelinas. We have become very fond of a crippled elderly javelina that we named Chester. We spent the winter in AZ and Chester came to visit us almost every day. We are weak humans and fed him corn. We left in May to return to NY to sell my home. All summer we worried about Chester. Would he survive,…