0
0
"Nothing is impossible,except that the state of your mind makes it so"Prof John R.R. Searl 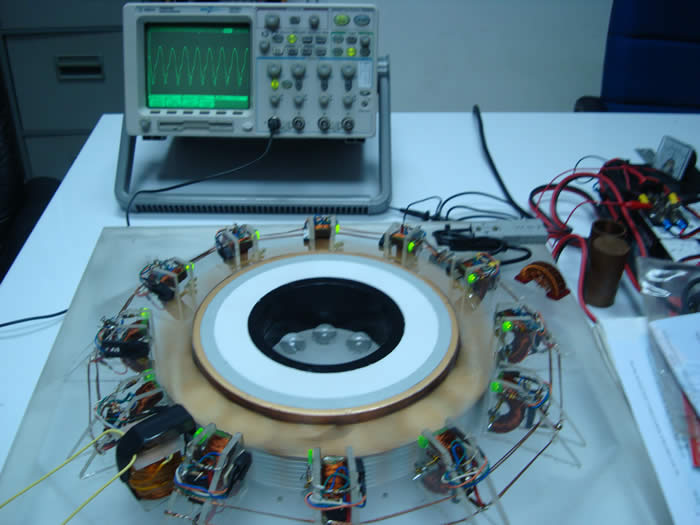 Scientists have always maintained that the only method of magnetization possible occurs with clear and discrete poles of North and South. The industry has produced multiple poles on a magnet, but always with discrete North South polarity.

On May 9, 2005, at The Victory Hall, Aboyne, Scotland, Professor John Roy Robert Searl demonstrated a magnetic wave pattern on a Ferro-magnetic metal material, thus proving conventional scientist wrong. This demonstration was witnessed by officials from the Scottish Government as well as a member of the press. The entire lecture was videotaped by a reputable production company from Los Angeles California.

The tests demonstrated a magnetic ring rotated on test set with constant rate and measurement taken with a gauss meter. The readings steadily increased and decreased in an even and fluid manner. Further tests were videotaped using an oscilloscope to show the complete repeating wave form. This leaves no doubt that the field that Professor Searl describes can be created and duplicated.

The secret to making this wave pattern on a magnetic material is a technical process known only by Professor Searl and his team. This magnetic wave pattern is used to create the Searl Effect Generator (SEG) and it is a cornerstone of a new era in clean and sustainable energy.

We are now closer to replicating the Searl Effect with a working prototype of the SEG. With the anticipated support, this technology will reach the entire World and bring about an exciting new energy age."The idea of utilizing unlimited sources of energy is the subject of various devices and experiments, most of which prove the existence of energy at the quantum level but not a method of creating a coherent and uniform flow of energy to pr...oduce useful electrical power. In contrast, John Searl discovered that in order to create a steady and stable flow, all the masses of the device (and the stimulating frequencies) must conform to precise values which are determined by a matrix of coherent numbers he calls the "Law of the Squares". The SEG’s ability harness the electron’s kinetic energy itself is a unique achievement that represents a new technology working with the highest quality of energy that nature has to offer and it is clean, non-destructive, unlimited and all-pervading."

Without violating the laws of thermodynamics - working in harmony with nature by using the ENERGY FROM THE FABRIC all around it, the SEG not only has the potential to power the home, the car, whole communities, assist in 3rd world countries..., clean the air, produce 'health' benefits but PLUS with its super-conductive, inverse gravitic properties as properly modified, can provide super-speed air travel with just 1/2G inside and get us into space for exploration??
Who wouldn't want to help get behind this incredible possibility for a CHANCE to change the Paradigm on this planet once and for all?!
Cheers to Prof. John Searl for 64 years of working on this technology -
HIS TIME & OUR TIME IS NOW!
Peace and Prosperity to ALL!


You need to be a member of Powerful Intentions. A Law of Attraction Community to add comments!