Concept - incident Light is too bright to be absorbed by any body and as such must be reflected for its properties to be utilised.

"UNI" is a beautiful Unicorn that lives in the forest which surrounds the village of Hark. She has the wisdom and experience of the world outside the forest - a place where Hark's inhabitants dare not venture because there only destruction and desperation thrives. She is always with her wise companion Izzy.

Josil and Alma are brother and sister - twins - who wish to learn all there is and love to consult UNI for her rhyming parables.

Tom and Gemma are brother and sister from the outer world who become lost in their forest and stumble across the portal to the village of Hark - where they are amused and surprised at how connected everyone is - with each other and with everything.

Hark has been "cut-off" from humanity since the beginnings of time - 2 stowaways on the Ark who dived overboard before it crashed into the mountain. Abel and Ede swam to the peak of another mountain where they encountered UNI.

There are statues of Abel and Ede in the central marketplace in their honour.. 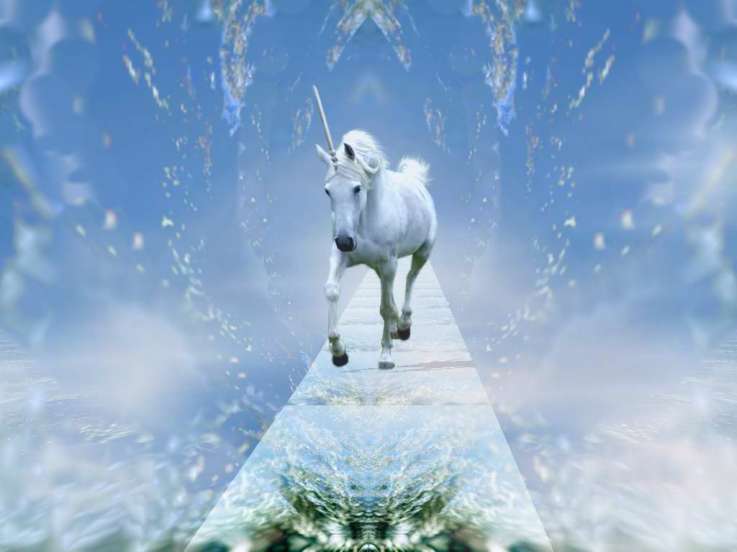 Opening Verse Rolling Up the Screen and VO

"Blessings to you this ONEderful day
An illusion you are in every way
My story will open your Heart
So listen good from the start
... and let your Soul come out to Play"

Enchanted forest with Butterflies, Elves, Fairies - everything is SPARKLING in reflection. We can see auras around the trees, the movement of Light beams.

There is the sound of hooves getting closer and closer.

UNI bursts into the clearing - a magnificent Unicorn with rainbow aura.

What is that on her horn?

We see it is Izzy, speared through his braces and fighting with the air.

UNI lowers her horn and Izzy tumbles to the ground.

IZZY "It was only a small spell"

Izzy is fighting with his brother OZZY who is a dark and brooding ogre.

Ozzy swings at Izzy with a large knobbled branch but Izzy deftly waves his wand to put a holding spell and cover him in molasses KAZZAM!

Izzy makes room for his mouth and nostrils, licks his fingers and skips away.

Uni scoops him up with her horn.

Izzy pulls his breaches straight and huffs and grumbles - waves his wand and ...

The molasses slide away, just leaving Ozzy in mid swing

TOM is halfway up a tree trying to reach CASPER, GEMMA's ginger kitten.

Gemma is standing at the bottom with her arms folded - not amused.

GEMMA "I told you not to chase him!"

Tom is really going out on a limb as Casper edges away along the thinner branches and is in far too precarious a position to respond.

A CROW flies into the tree and startles Casper into the direction of Tom - to grip onto his head . which makes Tom scream and Gemma scream as she jumps out of the way.

Tom lands in a heap with Casper rooted to his skull - Gemma tries to prise him free.

The Crow has a glint in his eye.

JOSIL is sleeping soundly with a small smile on his face - his aura is violet.

ALMA is tickling his nose with a feather - her aura is red.

Every time she tickles him and breaks his dream his aura changes to blue around his head.