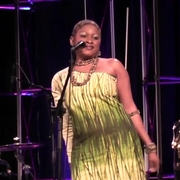 My powerful intentions are too much to be explained by this means and I prefer to be physically present and connected to the spirit of anybody before I can even open my mouth to say something. I do not mean to be arrogant but this is the truth and thank you for understaing.

To finally meet people similar to me, to share and to learn from others how to continue to cope in this world full of materialism.

Nigerian-born via Italy songwriter, singer, actress Sonia Aimy (Aimy) is the quintessential virtuoso of world music. Her music juts out unrestrained brilliance evoking the sound of highlife, afro-jazz, and call-and-response traditional African griot styles. Aimy’s style, however, is still effortlessly "afro-jazz & folk". Touching hearts and souls has always been her passion since she started singing at the age of 11 in her native Benin City in Nigeria where she received early education from her mother in traditional folklore. Aimy’s experience in the arts earned her various lead roles as an actress with the National Theatre of Turin, Rome, Alma Theatre (with Paolo Rossi) with which she toured across Europe, as well as RAI Radio Television Italia where she excelled in various drama series. She has performed at numerous concerts throughout Europe, Africa and in North America. The multi-talented Aimy has also starred in several Italian films. Aimy’s work in the media includes writing, producing, directing and presenting multicultural programs for radio. Aimy’s music career started when she was in her teens, singing at St. Joseph’s Catholic Church in Benin City, Nigeria. She developed interest in folk, traditional music and storytelling. She pursued education in traditional music and dance. When she came to Italy she studied jazz music and interpretation as well as theatre arts. This extra music education as well as practice through performances has allowed Aimy to craft a unique sound that is distinctly her own that is a beautiful amalgam of folk, afropop and jazz. Aimy commitment to themes of motherhood and fairplay respectively is highly present in her lyrics. Her talent and effort has been recognised in the Italian and Nigerian society through awards and nominations like: Best Positive Figure for Youths in Turin and Caserta (2005/2006); Millennium Models Nominee among fifty Nigerians in the world by Platinum Bank Limited, Nigeria in 2003; Nominated in 2005 by AfroLife magazine among the Top Ten best Nigerians in Italy. Recently, Aimy received an award in recognition of her work and commitment to end human trafficking through Art and Culture by Regione Vale D’Aosta. ‘Miss Aimy is a hardworking artist, who manages her time creatively engaging in numerous artistic initiatives. Her kind and generous spirit is evident in her lyrics and can be felt in her music and stage plays and is obvious in the much of an echo of African Spirituality she leaves on the stage in her live performances. Her art is distinctly cultural with a deep sense of her motherland, an echo of African Spirituality setting the backdrop and providing her audience the spiritual foundation for every moment of her presentation.